The Conflict Arrives is a Los Angeles conceptual studio composed of myself and Anders Bjerregaard-Andersen. We do work like a board game about development in Los Angeles, and are currently developing a collection of suburban folklore. To learn more about The Conflict Arrives, contact us through juicyandelicious@gmail.com

As It Lays is a new board game for interpreting Los Angeles. Players are cast as developers in the sprawling Los Angeles landscape, and must use their cunning to attune the city to a new likeness. Each developer has a selection of properties to build, varying only in terms of density, that they can place on the board’s grid according to a simple set of rules. For each new turn, developers must adapt to changing conditions on the board, determined by a set of “Situation Cards” that limit where and how they can build. These cards refer to historical, geographical, cultural and political phenomenons that may shape Los Angeles in the future. There are six different ways to win the game, referring to the varied patterns of developed properties that constitute the game’s New Los Angeles.

Whether the development patterns at each game’s end resemble the current Los Angeles is not important — the goal isn’t to create a facsimile simulation of LA, but to perform a new city under the interlocking systems and compulsions that push and pull a city into its shape. There is no “ideal” pattern to aspire to, and no historical trajectory is out of bounds.

As It Lays was first exhibited at the Los Angeles Biennale of Architecture / Urbanism in Shenzhen, to demonstrate my fascination with LA as a city of ongoing compromise, perpetually re-written as a fiction.

The game was created by myself and Anders Bjerregaard-Andersen, under our Los Angeles conceptual studio, The Conflict Arrives. To learn more about As It Lays, read the As It Lays entry in the first catalog on the Los Angeles Biennale of Architecture / Urbanism.

This work is licensed under a Creative Commons Attribution-NonCommercial-NoDerivatives 4.0 International License. 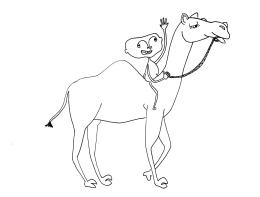